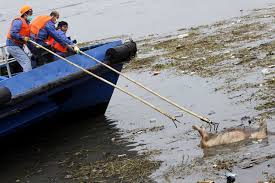 BEIJING — Pork buns and tap water may be off the menu in Shanghai, China’s biggest city with more than 23 million people, after thousands of dead pigs were found floating in the Huangpu River, which flows through the city, and in upstream tributaries. About 6,000 animals have been fished out so far in an operation that began last Friday, according to the Shanghai authorities, with more still surfacing, though at a slower pace. From International Herald Tribune

The questions around the pig die-off — what caused it, why the animals were thrown into the river and by whom — are deeply disturbing Shanghai residents as well as others in China, and the Ministry of Agriculture has announced an investigation. City water authorities say the drinking water sourced in the Huangpu is safe, though one water sample showed traces of porcine circovirus, Xinhua, the state news agency reported, adding it can spread among pigs but not humans.

China is regularly plagued by food safety and environmental scandals, but even so, the appearance of thousands of large, decomposing pigs in the river that feeds the country’s most sophisticated metropolis stands out.

There’s the question of why the pigs have ended up in the river. A report by the Oriental Morning Post, from Jiaxing city upstream in Zhejiang province, suggested there are apparently high death rates in the pig industry there; between 60 and 100 pigs die daily in Zhulin village alone, the dfdaily.com reported, in an article carried by the People’s Daily Web site. It wasn’t clear why.

China/ReutersDead pigs are put into a pit in Zhulin village near Jiaxing in Zhejiang province. Workers removing the dead animals, left by breeders on roadsides, said they are carrying away more than 200 pigs a day.

The village, in Xinfeng county, has pens for dead pigs but they’re full, the report said, quoting pig farmers and disposers in the village. Suspicions are growing that a recent crackdown by the police on the sale of pigs that have died from disease but are being illegally sold into the human food chain may be contributing to the problem, as people dump the animals in the river instead.

“In the second half of last year, the Jiaxing police investigated 12 cases across provinces of illegal buying, selling and slaughtering of ‘disease dead pigs,’ worth over a million renminbi,” the report said.

Pork, known here as “big meat,” is a favorite food in China, but pig farmers say they struggle to make enough money from the business. Farmers have in the past sold dead, diseased pigs “to make a little money,” the report quoted a farmer identified as Hong Wei as saying.

A 100-kilogram, or about 220-pound, pig sells for only about 600 renminbi, according to the article, while feed costs alone total at least 150 renminbi, farmers said. Local pig dealers have proposed that local authorities pay a small fee to farmers to recover dead pigs and help curb the illegal trade, suggesting 10 renminbi, the report said.

2 thoughts on “CHINA: With 6,000 Dead Pigs in River, Troubling Questions on Food Safety”